In total, 34 potential participants were excluded during screening (Table S2), and 109 patients were enrolled in the study between April 16, 2015, and November 15, 2017, and included in the analysis of efficacy and safety. The first 44 patients were started on linezolid at 600 mg twice daily, and the remaining 65 were started on 1200 mg daily. Two patients who had positive cultures during treatment (one at month 4 and one at month 5) had their treatment extended for an additional 3 months. Follow-up to 24 months after the end of treatment is ongoing.

Baseline Characteristics of the Patients.

The demographic and clinical characteristics of the patients are given in Table 1. The median age was 35 years (range, 17 to 60 years), 57 patients (52%) were male, 56 (51%) were HIV-positive, 92 (84%) had cavities on chest radiographs, and the median body-mass index (the weight in kilograms divided by the square of the height in meters) was 19.7. All patients with HIV coinfection were treated with antiretroviral therapy during the trial, and all except 2 had been receiving antiretroviral therapy before enrollment. The median time since the original diagnosis of tuberculosis was 12 months (range, <1 to 141 months). All except 9 patients had received tuberculosis medications in the month before enrollment, with the most common drugs used (by ≥55 patients) being fluoroquinolones, pyrazinamide, terizidone, clofazimine, para-aminosalicylic acid, ethambutol, and ethionamide, with a median of 7 (range, 3 to 13) tuberculosis drugs being taken. A total of 71 cases (65%) were classified as XDR tuberculosis, 19 (17%) were classified as MDR tuberculosis that did not respond to treatment, and 19 (17%) were classified as MDR tuberculosis for which treatment was stopped because of side effects. 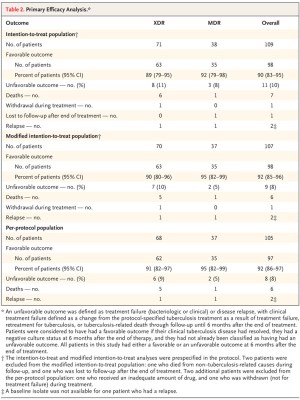 The number of patients classified as having a favorable outcome in the intention-to-treat analysis was 98 (90%; 95% CI, 83 to 95), with similar findings in the modified intention-to-treat and per-protocol analyses (Table 2). These results had a lower bound of the 95% confidence interval that was greater than 50% (Table 2).

The results were similar when stratified according to tuberculosis type. Among the 71 patients with XDR tuberculosis in the intention-to-treat population, the number classified as having a favorable outcome was 63 (89%; 95% CI, 79 to 95), and among the 38 patients with MDR tuberculosis, 35 were classified as having a favorable outcome (92%; 95% CI, 79 to 98) (Table 2). The results were also consistent regardless of HIV status and linezolid dosing scheme. 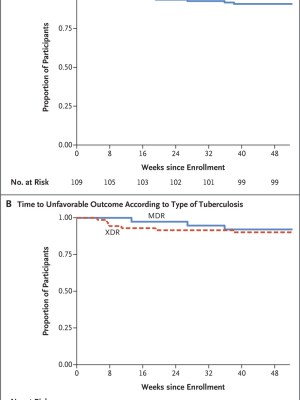 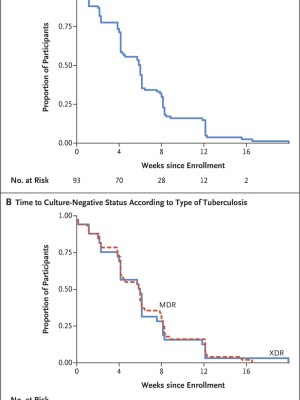 Time to Culture-Negative Status among Patients Who Were Positive at Baseline (Intention-to-Treat Population).

The time to an unfavorable outcome, overall and stratified according to tuberculosis type, HIV status, and linezolid dosing, is shown in Figure 1. Kaplan Meier estimates of the time to culture-negative status, overall and stratified according to tuberculosis type, are shown in Figure 2. There were two relapses. Whole-genome sequencing performed on the corresponding baseline and late isolates confirmed that one patient had a relapse with the same strain of M. tuberculosis (only 5 single-nucleotide polymorphisms [SNPs] separated the two isolates). One of these SNPs produced a change in the bedaquiline resistance gene Rv0678, from wild type at baseline to a 138-139insG variant in the late isolate. The bedaquiline MIC was elevated in the late isolate (4 μg per milliliter, as compared with 0.5 μg per milliliter at baseline).19 The second patient who had a relapse did not have a baseline isolate available for testing, but the late isolate was analyzed and was shown to be susceptible to all three study drugs. 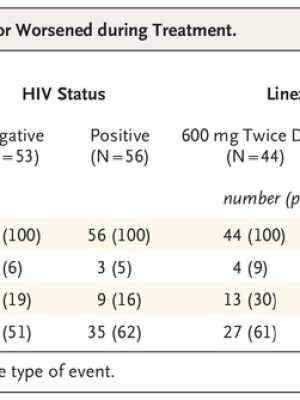 Adverse Events That Occurred or Worsened during Treatment.

All patients had at least one adverse event that occurred or worsened during treatment, and 19 (17%) had serious adverse events, which were similar in frequency regardless of whether patients were HIV-positive or HIV-negative. Six patients died during the course of treatment (1 patient at month 1, 4 at month 2, and 1 at month 3; an additional patient died from sepsis and gangrene after relapse of tuberculosis). A total of 62 patients (57%) had adverse events of grade 3 or higher that occurred or worsened during treatment; the percentage of patients with such an event did not differ substantially according to HIV status (Table 3). Details of the adverse events and deaths are provided in Tables S3, S4, and S5.

During treatment, 88 patients (81%) were reported to have peripheral neuropathy; in the majority of cases, the symptoms were mild to moderate. Among patients whose mean score on the Brief Peripheral Neuropathy Screening scale indicated moderate to severe neuropathy, the median time to a return to a score indicating no or mild neuropathy was 3 months. Patients are continuing in follow-up, and the time course of the resolution of neuropathy is undergoing further analysis. Figure S1A shows the time to a first linezolid dose reduction or interruption for neuropathy; the majority of these events occurred after the initial 3 months of treatment. Results were similar for patients who were coinfected with HIV and those who were HIV-uninfected and for patients who initially received linezolid at 600 mg twice a day and those who received linezolid at 1200 mg daily. Optic neuritis developed in 2 patients, which resolved on withdrawal of linezolid. Blood and lymphatic system disorders were the second most common adverse events that occurred or worsened during treatment: myelosuppression occurred in 52 patients (48%); 40 of these patients (37% of the study population) had anemia, 7 of whom had hemoglobin decreases to less than 8.0 g per deciliter. Figure S1B shows the time to a first linezolid dose reduction or interruption for anemia. In the majority of patients with this event, it occurred during the first 2 months of treatment, with similar results observed in HIV-coinfected and -uninfected patients and in patients who received different starting doses of linezolid.

To Choose a Memory… –

COVID-19 Treated With a Hep C Drug — How Does it Work?

To Choose a Memory… –

COVID-19 Treated With a Hep C Drug — How Does it Work?

Cost for hepatitis C drugs going down way down?

Finding Parkinson’s Early May Be Matter of Testing Hand Temperature

On motherhood and Lyme |

Tapering Ropinirole Caused Me Some Scary Side Effects

Donor Spotlight: A Donation of Artistry
10 hours ago

Donor Spotlight: A Donation of Artistry